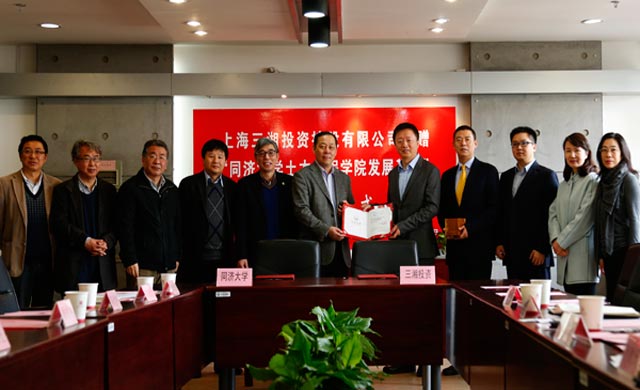 the fund from sanxiang holdings, representing sanxiang’s effort to advance the development of the college and its programs, talent training, r&d, and international exchanges and cooperation, was mainly earmarked for an r&d platform for the national research center of building prefabrication (henceforth referred to as the research center). a certificate and a gift emblematic of the tongji spirit were presented to sanxiang in recognition of its contribution.

prefabrication for upgrading the building sector

the national research center of building prefabrication was established in response to china’s demand for industrial construction and on the strength of tongji university’s capabilities. construction of buildings, bridges, and roads is mostly performed on site in china, which tends to be labor-intensive and vulnerable to weather conditions. construction quality, subject to human factors, is difficult to maintain. there are other issues associated with traditional methods of construction, including material waste, noises and dust. the national government therefore promotes industrial construction to shift most of the site work to factories.

industrialisation is a trend for the building sector. college of civil engineering in tongji university leverages its expertise in civil engineering, and bridge and mechanical engineering for flexible and vigorous talent training and research. the research center is the only national prefabrication r&d platform in china. it organises r&d and promotes technology adoption through a network of research institutes and enterprises. it co-founded shanghai tongji green building precast engineering co., ltd with sanxiang last year. counting the latest donation, sanxiang has contributed 20 million yuan to the center.

mr. yang xianjin shared his insights: as a top-tier university in china, tongji would be brought a step closer to the goal of sustainable development by vigorous programs. according to the latest qs world university rankings by subject, tongji was among the top 50 in three subject areas. the ranking was proof of the progress and prestige of tongji. tongji was presented with good opportunities right now: the central government was actively supporting prestigious programs in top universities, and shanghai was promoting innovation centers. tongji valued cooperation with the government and different sectors of the society. two tongji programs were included in the master plan for innovation centers. the cooperation with sanxiang, moreover, promised more joint-efforts and mutual benefit.

sanxiang holdings is a private investment holding company with a proven business record in investment and asset management. it advocates and facilitates a healthy lifestyle with its portfolio in real estate development complemented by investment in bio-tech and green technologies.

mr. xu wenzhi of sanxiang co., ltd, which is at the forefront of sanxiang holdings’  real estate business, said that sanxiang, keenly aware of its social responsibilities, was determined to make a difference. if precast was widely accepted, it would go a long way towards reducing the environmental footprint of the the building sector. that was why sanxiang promptly responded to tongji’s proposal of a joint prefabrication business. the competence and expertise of the tongji team as demonstrated during the partnership convinced sanxiang to make further contributions.

sanxiang is always guided by a green building strategy whereby r&d and adoption of green technologies will remain an integral part of the company’s effort and whereby short-termist outlooks or impractical decorations are rejected. sanxiang has been embracing the latest german design concepts and leveraging innovative technologies to create quality living spaces. the integrated building and solar system, which has been granted 6 national patents and adopted across all sanxiang projects, serves as one example. sanxiang aims to promote building prefabrication which, though new to china, is booming in japan and germany through cooperation with tongji.

the partnership between tongji and sanxiang predicts a new era for prefabrication.