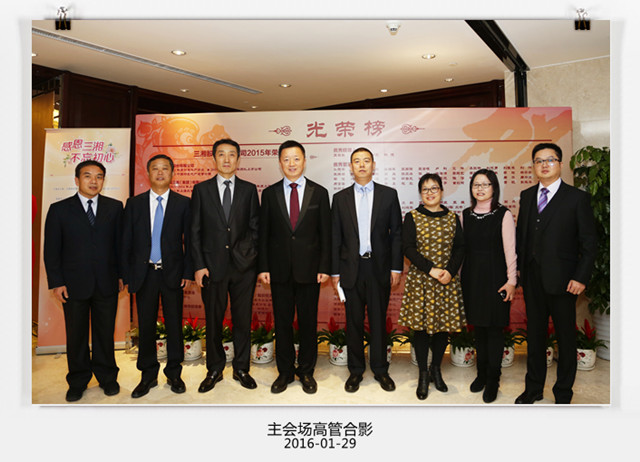 bonded by the motto of “stay grateful and stay orginal”, the sanxiang team was looking to make greater achievements. the 2016 work conference of sanxiang holdings co., ltd. captured and celebrated that spirit.on january 29th, 2016 the venue at guang dong hotel was alive with over 200 attendees: gm xu wenzhi and the senior management of sanxiang co., ltd. and vice chairman chen jingsong and general counsel wang qinghua of sanxiang holdings were present. also among the attendees were managers and deputy managers of each unit, representatives of outstanding units, outstanding individuals and employees qualified for the share-award scheme.  the teams from yandi biotech and xiangde real estate development also participated via videoconference. the conference was chaired by mr. chen jingsong.

mr. xu wenzhi delivered the 2015 work report. he enumerated sanxiang co., ltd.’s achievements over the past year: a market capitalisation of over 10 billion yuan, the launch of the share-award scheme and corporate bond issuance, new highs in sales contracts and collection of payments, the beginning of construction for projects in chongming, zhangjiang and yanjiao, a golden award for zhangjiang sanxiang curio as an excellent residential project,and the recognition the company had received as a top 10 green developer and a listed company with the best management team. while delighted at the achievments, mr. xu was mindful of the risks and challenges. he pointed out that the strategic shift towards a dual focus approach would require upgraded operation and management. that would create new pathways to growth on the one hand and pose difficulties on the other. to fulfil the potential of the company and the time called for a realistic perspective, a sense of crisis, and openess to continuous learning and innovation. therefore, mr. xu encouraged the staff and the management to work harder.

mr. huang jialin, chairman of yandi biotech presented yandi’s extraordinary performance. aiming for developing a national health brand, yandi biotech was determined to tap into a wider international market through prudent preparation and operation. the yandi team, nourished by the “5h” corporate culture of honesty, health, harvesting, help and happiness, scored great success in sales, product r&d, branding, marketing and community service. their effort enhanced the company’s profitability and reputation for social responsibility. looking ahead, yandi was confident in its position in direct sales and the possibility of doubling its performance by adjusting itself to the surging health industry and the one belt one road initiative.

the reports received a resounding round of applause.

general counsel wang qinghua announced outstanding units and individuals of 2015 and winners of the writing competition on the theme of “stay grateful and stay original”. when the venue was enlivened with music and applause, the awardees lined up onstage to receive their awards. representatives of the awardees, including ms. xiong xing, vice gm of the corporate development unit of sanxiang holdings, expressed their gratitude and pledged to work harder. ms. huang huanchun, mother of zou shihong from sanxiang co., ltd. won the first prize in the writing competition. still recovering from medical conditions and travel fatigue, ms. huang huanchun could barely contain her emotions when she talked of the support and opportunities her daugther had received from the company. she said her family would also be a strong support for her daughter’s work.

the attendees were inspired by chairman huang hui who encouraged the sanxiang employees to put responsibilities over short-term gains and losses. in this way, the employees would achieve personal and professional growth while contributing to the company.

promotional videos for sanxiang co., ltd, yandi biotech and jingtech and clips from employee interviews were shown on the big screen. glimpses of the past filled each viewers with passion and enthusiam.

the lucky draw shifted the mood. the audience held their breath as executives and representatives of outstanding individuals drew the lucky numbers with a click. the atmosphere grew more and more intense as the 1,000 yuan , 5,000 yuan and 10,000 yuan prizes were claimed in turn. the climax came when the luckiest of all— the winning number for the 100,000 yuan prize was unveiled. yandi biotech scored a hat trick with an employee bagging the biggest prize to the cheers of participants from three venues.

a group photo was taken of the management and the awardees.

the day was consummated with a dinner party where mr. xu wenzhi toasted the participants. vice chairman rui yongxiang of sanxiang co., ltd came directly off the plane just in time to join the senior management in greeting each table. the attendees were exhilarated by the cheerful atmosphere as much as by the wine.